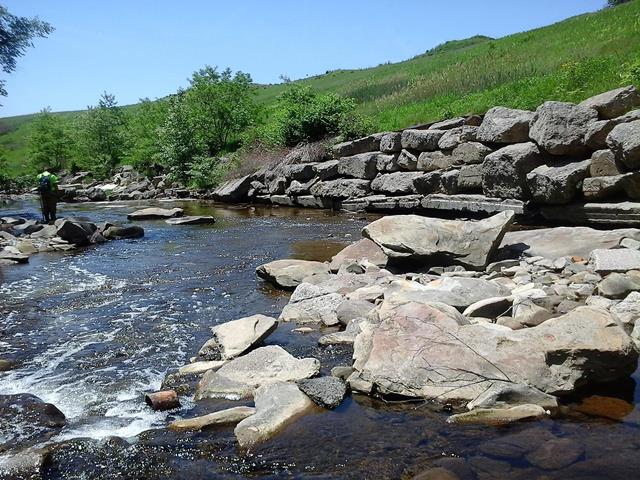 The Harvard Refuse, Inc. (HRI) landfill, located in Cuyahoga County, Ohio, operated from approximately 1949 until 1988 and has never been properly closed. It is one of many so-called “orphaned” landfills in Ohio, although its current ownership status is more complicated than most orphaned facilities.

The Facility is located at 7720 Harvard Avenue, Cleveland, Cuyahoga County, Ohio. The Facility is under the jurisdiction of two approved health departments: Cuyahoga County Board of Health (CCBH) and Cleveland Department of Public Health (CDPH). The Facility contains approximately 65-acres of waste and is bisected by Mill Creek (approximately 70-feet deep) and by railroad tracks. The previous owners have filled in the flood plain and most of the valley, leaving only a narrow channel for Mill Creek.

The Facility can be described by seven waste areas in three municipalities: the City of Cleveland (Cleveland), the Village of Cuyahoga Heights (Cuyahoga Heights), and the City of Garfield Heights (Garfield Heights). The waste areas, waste types, and municipalities from north to south are identified below. All acreages and waste type information is approximate, based on historic documentation:

The total acreage of the site is approximately 100 acres, including the approximately 65 acres of waste areas identified above and surrounding property.

The following highlights the site history and site conditions:

Most significantly, the State entered into a Judicial Consent Order with Mr. Lojek and HRI on December 17, 2009, under the jurisdiction of the Cuyahoga County Court of Common Pleas. The settlement required the owner to give control of all assets associated with Facility that were not exempt from bankruptcy to a court-appointed Receiver. The Receiver was then supposed to sell these assets, with the proceeds to be deposited into a trust established for this purpose. The proceeds were to be used by the State for closure, post-closure care, clean up and/or remediation at the site.

As part of the settlement, a Receiver was appointed. He took possession of the Facility in December 2009 and was to do what was needed to manage the Facility and assets (collect rents and pay debts, etc.) until he could liquidate the assets and place them in the standby trust. The Receiver has done some work at the landfill, including repairing two gas flares and rehabbing some of the gas monitoring wells. He also installed a chain link fence around the entire landfill, removed or is in the process of removing large piles of concrete/asphalt, and leased space at HRI to a utility company so it could store pipe.

Since December 2009 the Receiver has deposited a minimal amount of money into the trust. For a variety of reasons, the full liquidation of assets has never occurred, and the site has remained in receivership.

The July 2015 gas migration incident required Ohio EPA and the aforementioned local health and safety organizations to mobilize their resources to address the immediate threat. The incident raised renewed concerns about the status of the Facility, including the on-going maintenance and monitoring needed for the existing active gas extraction system; the failure to fully liquidate the assets as contemplated by the consent decree; and the long-term oversight of the Facility.

Cuyahoga County Common Pleas Court Judge Sheehan has been monitoring the parties’ compliance with the 2009 Consent Order, and the Court has held periodic status conferences to determine the current status of the matter. The July 2015 gas migration incident has increased the focus on the situation. With the oversight of Judge Sheehan, Ohio EPA has been working to develop a more sustainable approach for the long-term stewardship of the site.