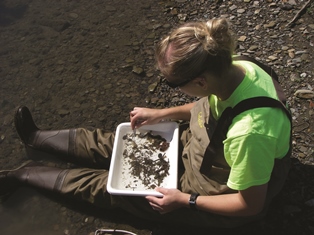 The purpose of the study is to determine impacts from combined sewer overflow (CSO) and other pollution sources on water quality and the biological community. Monitoring near the mouth of Mill Creek is required by the Sewer District’s National Pollutant Discharge Elimination System (NPDES) CSO permit. An upstream site was also monitored to help identify any impacts.

Water chemistry samples were collected once a week for five weeks starting in June. In general, the Mill Creek sites met Ohio EPA water-quality standards for warmwater habitats. However, due to heavy rains in June 2014, some parameters did not meet the standards.

A Qualitative Habitat Evaluation Index (QHEI) score was also determined for each site. The QHEI, developed by Ohio EPA, is used to assess the aquatic habitat conditions at each sample location by providing an evaluation of the physical components of a stream, which can help explain why some fish species are present or absent there.

Sampling for macroinvertebrates in Mill Creek started in 1995, and has been conducted

annually since 1999. Macroinvertebrates are sampled using Hester-Dendy samplers, which consist of stacks of small plates held together with a bolt. These samplers are attached to a concrete block and placed in the water for six weeks. Then the samplers are removed, and the macroinvertebrates that have colonized the plates are identified and counted.

stuns the fish, causing them to float to the surface where they can be collected with a net. The captured fish are counted, identified, weighed, and examined for the presence of any physical abnormalities. The fish are then released back into the water.

Electrofishing results are evaluated using the Index of Biotic Integrity (IBI). The IBI also was developed by Ohio EPA and is an indicator of the health of the fish community. It looks at fish numbers, diversity, feeding strategies, environmental tolerances, and disease symptoms. In 2014, all sampling at sites downstream of the Mill Creek Falls indicate that the fish community is getting healthier. (See charts below.)

Three pollution-sensitive fish species—the northern hog sucker, sand shiner, and greenside darter—were collected in 2009 near the mouth of the stream. Since then, greater numbers of hog suckers and sand shiners have been collected, and pollution-sensitive rainbow darters and shorthead redhorses were collected in 2012 and 2013. Also collected in 2013 downstream of the falls was the common intolerant redside dace, found only in “Exceptional” warmwater habitats. All of these species are pollution sensitive and are generally found only in clean, unpolluted waters.

The two downstream sites were in full attainment of Ohio EPA’s criteria in 2014. This indicates that CSO on Mill Creek is not significantly impacting the biological community at this site. They also show how the creek has improved in recent years. These improvements may be due in part to the Mill Creek Tunnel, built to capture wet-weather discharges from CSO.

Editor’s Note: this article appeared in the Fall 2015 issue of Clean Water Works of the Northeast Ohio Regional Sewer District.